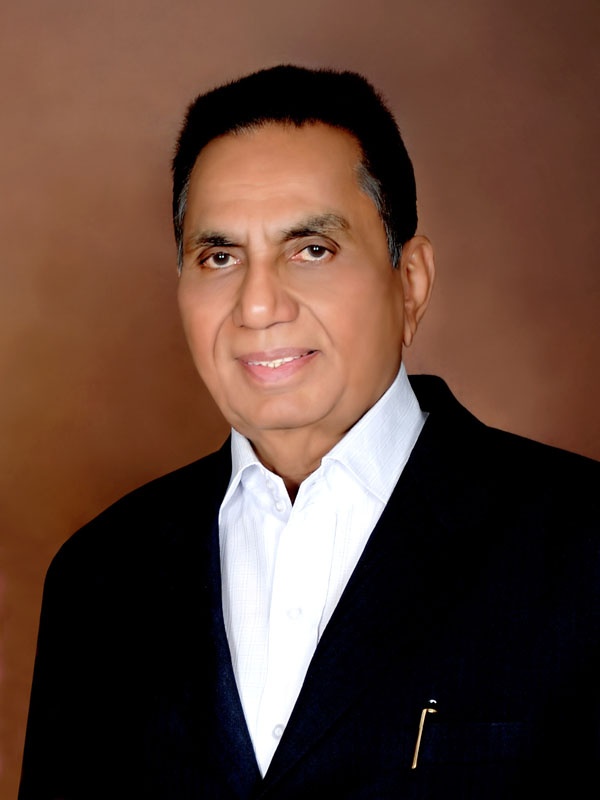 Dr. Rama Nagappa Shetty is an entrepreneur, philanthropist and an educationist. In 1961, Rama Nagappa Shetty laid the foundations of the R N Shetty & Company, a partnership firm. During the next four years, the company took up construction of three major projects – building bridges on the Honnavar – Bangalore road. Moving out of his native in 1966, he began his operations from Hubli, a major city in northern Karnataka.

In 1967, moving forward he formed Naveen Mechanized Construction Company Private Limited with 7 other civil contractors. The company undertook construction of Hidkal dam in Belgaum district. However, it did not live for long, suffering huge financial losses. In order to keep it alive, other stakeholders in the company offered Shetty their share. In the next eight years, Shetty undertook several projects that nursed the company back to good health. Both these companies have executed several major irrigation works and hydro power projects, including construction of dams, canals, tunnels, bridges and buildings in places such as Hidkal, Tattihalla, Supa, Gerusoppa, Rajankollur, Gundalgera. The company has also built 18 tunnels for the Konkan Railway Corporation Limited and canals for the Upper Krishna Project.

In 1975, he entered in the hospitality sector, by forming Naveen Hotels Limited. A five-star hotel was constructed to mark the group’s foray into hospitality business in Bangalore, which was leased out to Taj Group. It is presently known as Vivanta by Taj MG Road. Further, the hotels division constructed two more hotel properties in the Karnataka, one at Hubli and a resort at Murudeshwar naming them Hotel Naveen, presently called as ‘The Gateway Hotel Lakeside’, Hubli and ‘RNS Residency /Naveen Beach Resort’ respectively. Both these properties are managed by R N Shetty Group. A new 300 plus room five star hotel has been built in Yeshwantpur and is leased to the Taj group and is operated as Vivanta by Taj Yeshwantpur

Diversifying further, Shetty established a manufacturing unit with the main aim of providing jobs to the local people of Karnataka. With this in view, Shetty established a ‘Mangalore Tiles’ tiles manufacturing unit in 1977 naming it Murudeshwar Tiles Private Limited. This unit with a capacity of 40,000 tiles per day is one of the largest Mangalore-tile units in the Coastal Karnataka region.

In 1981, Shetty set up Naveen Structurals and Engineering Co Pvt Ltd, which specializes in skilled fabrication works specific to construction industry. Their workshop in Hubli is highly sophisticated, and contains state-of-the-art equipment and machinery. It manufactures shuttering silos, crest gates and many other specialized structures in the past.

However, the group’s most prestigious industrial project took shape in 1987, when Shetty forayed into the manufacture of glazed ceramic tiles by setting up Murudeshwar Ceramics Limited (MCL), the only listed company in the group. Located at Hubli, Sira and Karaikal, Pondichery MCL is one of the leading manufacturers of ceramic and vitrified porcelain floor and wall tiles in India. It also manufactures natural granites.

In 1993, Shetty ventured into power sector with the setting up Murudeshwar Power Corporation Limited. The company has successfully developed and commissioned a mini hydel power project of 11.6 MW at Narayanpur Left Bank Canal in Bijapur district in 1999

The group has also taken the dealership of MaruthiUdyog Limited and has opened showrooms at Hubli, Bangalore (Yashwantpur, Amruth Nagar and Hosur road), Gadag,Sirsi, Nelmangla ,Bijapur, and Murudeshwar. One of its Bangalore showrooms is in fact the biggest in the country and has been rated as Maruti’s No 1 dealer in India for the last three years.

Shetty is also involved in a number of Philanthropic activities through the R. N. Shetty Trust established by him. The Trust runs a number of educational institutes(including RNS Institute of Technology) and hospitals in Karnataka. A devout Hindu, Shetty is credited with the modernization of the temple town of Murudeshwara as well as creating monuments in the town. The Murudeshwara Shiva temple and temple complex, including the 249 feet tall Raja Gopura, which is considered the tallest Gopuram in the Asia; as well as a huge towering statue of Hindu god Shiva in the temple complex,considered as the tallest statue of Shiva in the world standing at 123 feet, were built by the finances provided by Dr. R.N. Shetty.

In 2006, RNS Infrastructure made its foray into the real estate sector with the launch of RNS Shanthinivas, its maiden Apartment project which was well received in the market.